What is Wangiri Fraud and how does it impact telecom operators?

Wangiri fraud, a callback scam dates has its origin to the Japanese word which means “one ring and cut”. Telecom operators are facing this for over a decade now and this is only growing exponentially year on year around the globe. In Wangiri, a fraudster gives a missed call to several victim’s phone numbers of different countries from an international or unusual number. To the user, the CLI (caller number ID) is modified in such a way that it looks like a genuine call and when the victim calls back, it turns out to be a premium rate service (PRS) number owned by fraudster for which the victim is charged heavily for the calls. The fraudster intends to keep the victim on hold to increase the billed amount. The premium rate service provider pays the fraudster a certain share of the call revenue for each minute of call received by the premium rate number.

As per the CFCA 2019 fraud loss survey report, Wangiri is one of the top 5 fraud methods used by fraudsters to carry out fraudulent activities. It is also estimated that telcos are losing close to USD 1.82 billion globally to this fraud. 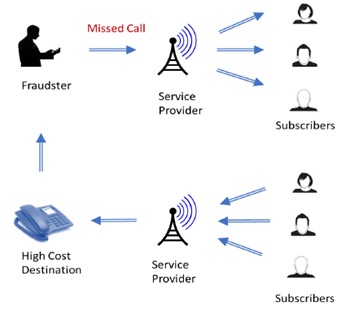 Telcos incur both direct and in-direct loss due to Wangiri Fraud. Wangiri impacts the customers adversely resulting in customer churn due to high customer dissatisfaction from bill shocks and bad customer experience. It also has a negative impact on the operator brand image as subscribers would complain about the high call rates charged to them without them being aware of it. There is also an impact on the cost due to the increase in customer management.

Why Wangiri cannot be eliminated?

The two main reasons due to which Wangiri cannot be eliminated but can be managed are:

The end carrier who terminates a fraudulent missed call is not aware of the fraudster details and the country from which call has originated is a high-risk destination or not. Better awareness at the carrier level can significantly decrease many Wangiri cases.

As is clear from the statistics, Wangiri is eating a good chunk of the overall telecom revenues globally and needs to be addressed by the operator. Here is an interesting blog which talks about 8 simple strategies for telcos to combat Wangiri fraud. We conclude that Wangiri fraud cannot be eliminated, but its adverse impact of direct and indirect losses to the operator can be minimized to a large extent by having a robust fraud management system that can monitor the calls at source and tear down the calls in real-time.