Through the last one decade when telecommunication globally evolved from 2.5G to 3.5G taking along the subscribers from a mere 56 Kbps to streaming of HD videos & music on your handset, data and content has evolved by giant leaps far faster than anyone predicted. The evolution not only provided a broad variety of services to the end users but also magnified the economics of content provision, VoIP services and eCommerce by leaps and bounds.

A far cry from just using you mobile phone for voice and SMS, the thirst for data from the end users of today sends out a clear message that even the speeds offered by 3G networks fall short of the requirement. So much so that this evolution is slowly but steadily diminishing the traditional circuit switched voice traffic.

The below stats geographically indicated illustrates the current data evolution: 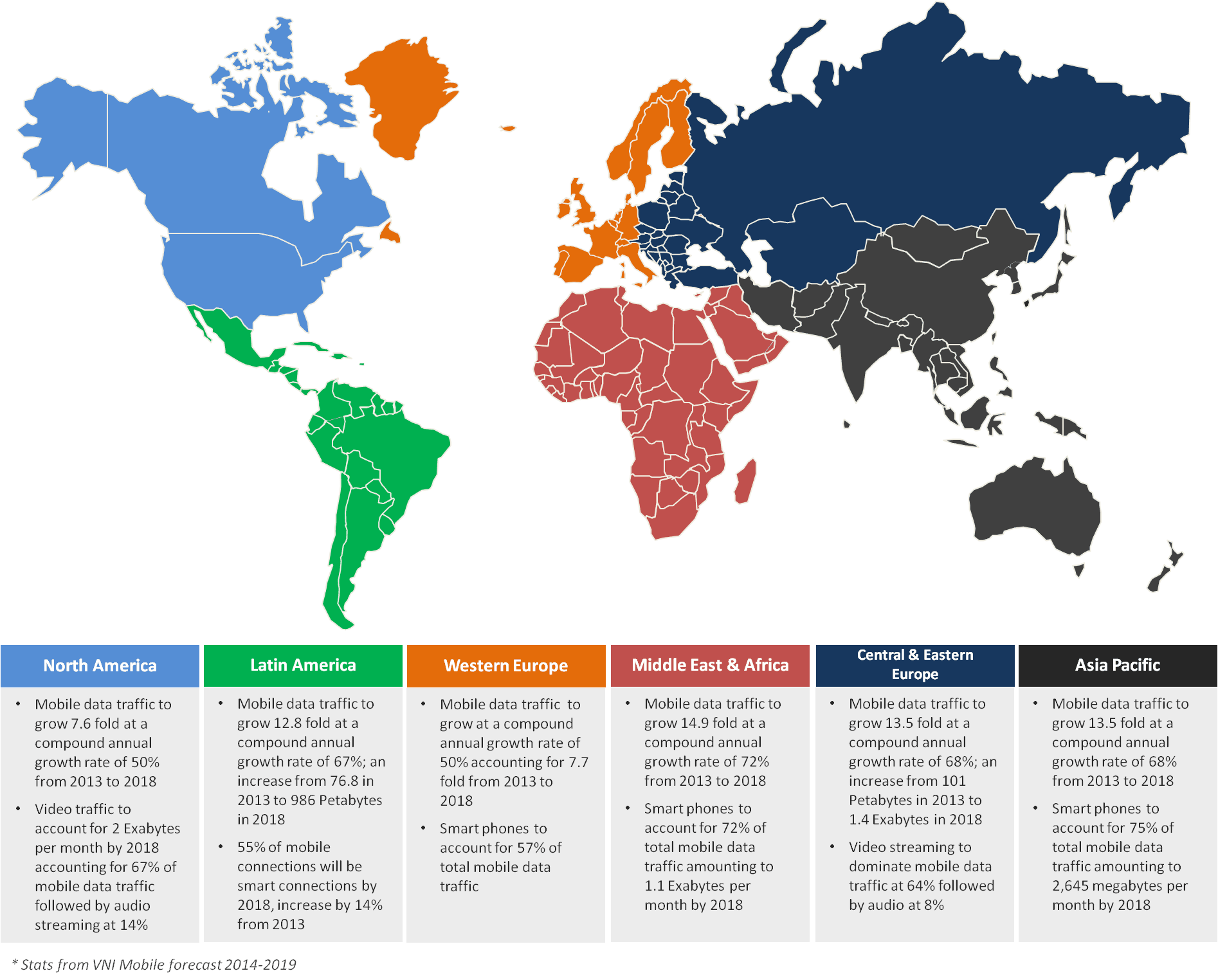 The evolution of LTE differs not only from an end user product offer perspective but also from the point of network architecture. This makes LTE evolution very different from the 3G evolution wherein only a few components changed along with minor adjustments in xDR formats. These minor changes resulted in majority of the core RA practices to accommodate a 3G risk mitigating process with minor adjustments to already existing controls.

However this would not be the case when it comes to LTE wherein majority of the network components are different with layers of complexity that originates from the perspective of how products are designed and offered.

When it comes to how RA facilitates product design in an LTE network we must take note of the fact that very few RA practices today have a functioning RA process that contributes to marketing campaign, product offer development and change management in a 2G / 3G / fixed line / broadband environment. The primary reason being that majority of the RA operations still concentrate towards leakage detection and not revenue enhancement.

However in the case of LTE where subscribers have access to multitude of content and eCommerce in a market which is growing at a rate of 30% – 55% at any given geographical market coupled with thinning bottom lines, here RA processes for product design becomes far more important in the insights that can be generated through various multi-dimensional usage modeling.

Unlike a 2G & 3G environment wherein the subscriber service configuration is spread across the order management system, HLR, IN and billing in an LTE scenario the scope of risk is drastically amplified due to the dynamic allotment of service elements in the PCRF as per a designated service plan.

Herein any risk mitigation process begins with the analysis of services allocated at order management, subscriber’s historical usage and the subsequent policies that are dynamically enforced by the PCRF.

LTE brings in complexities within each service plan wherein the rating differs across each and every data session initiated by a subscriber. For instance, if a subscriber is streaming a video / music and simultaneously texting through a popular messaging service the corresponding rating will also differ specific to the plan associated to a session; in this case video stream will be rated differently from the messaging service. Here again to add another layer of complexity, rating can also differ on the QoS guaranteed to an end user.

It becomes fairly clear that majority of the traditional controls that has been used for a 2G & 3G scenario cannot be reused for RA in LTE thereby paving the way for RA evolution along with the corresponding LTE evolution.

One of the important takeaways in the evolution of RA is the importance of analytics for revenue reporting / projections through multi-dimensional data modelling which is a must in a LTE environment which thereby provides a multitude of insights on subscribers, products, network utilization and revenue generation.

Srikanth is a Senior Consultant in Subex’s Business & Solutions Consulting vertical, focusing on Emerging Markets. He has over 9+ years of experience in consulting and advisory in the telecom industry with key focus on Revenue & Cost Assurance, Information Security, Governance Risk and Compliance. His client portfolio includes Aircel, MTNL, Tata Communications, Videocon, DST and PGi in APAC; STC, MTN, BTC in EMEA; Verizon, XO, Fairpoint and AT&T in NA.

Basically assurance services are independently and professional opinions reduce the information risks. this services use through consulting services. So that various company use assurance service to test financial and non financial services. In this services accountant done various quality of works like customer satisfaction, information system security, business risk management and audit outsourcing.