Customer Analytics : Gen X and Y and the Millennial Divide

We live in a world where technology is like a digital liquid that’s flowed around every aspect of our lives. There’s no doubt that technology can help to oil the craggy wheels of daily life, and while some find this enabling and liberating, others consider the intrusion to be more insidious. Working out where people stand on this issue is generally just a simple matter of checking their birth date. Many born before 1980 tends to view social and on line everything with suspicion, whereas those consumers born after that date, referred to as Generation Y, or Millennials, are far more comfortable with social media and sharing everything online. In a recent report from Pew research it was shown that the Millennials are much greater users of social media than their parents. 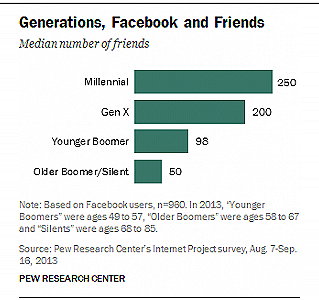 This is probably because Millennials are the first generation that have grown up entirely with the internet and mobile phones.  They are ‘digital natives’. It’s difficult to know exactly what effects this has on general culture, but one surprising change is that Millennials tend to be far more optimistic that their parents were when they were young. While Generation X and before are more inclined to have a cynical and pessimistic attitude towards the future, a recent report by the Pew Research Centre, Millennials in Adulthood, has found that, despite feeling detached from politics or religion and burdened by debt and recession, the Millennials are inexplicably much more optimistic. According to a recent Gallup poll, eighty percent of millennials, aged 18 to 29, feel positive about the future and say their standard of living is improving.  The reasons for this relentless optimism are unclear but researchers at Pew have pondered that it may be down to more nurturing parenting, or perhaps it’s because millennials always feeling at the centre of their own social network.

Another characteristic of the millennial generation is that, contrary to predictions that technology would free us all from work, they are now working harder and are more driven to succeed than ever before. In his book ‘Generational Teaching: Motivating the Minority’ Christopher Alan has also found that Millennials are ‘more polite and considerate’, ‘attentive and respectful’ and prefer to work in teams rather than in a hierarchy. Goldman Sachs also says that they are also more health conscious and savvy than earlier generations.   But, as ever, the picture is never that simple, because it seems that the Millennial generation is itself divided in two, as Pew Research has written

This all has very great implications on marketing, and how companies should reach out to different generations. Connecting with customers is one of the greatest challenges marketers face, and capturing Millennials is now one of the key battlefields for competing companies. As Leah Swartz of Millennial Marketing says

‘When it comes to fashion and shopping, there isn’t a more important demographic for retailers to reach than millennials.’

Goldman Sachs have even put together an infographic dedicated to marketing to Millennials in which they identify several key things to consider when marketing to the ‘largest generation in US history’. In summary they are

From a non-millennials perspective it may seem that they are so immersed in instant messaging and playing computer games that they are oblivious to the real world, but, on the contrary, millennials are very much aware of the state of the world. It’s just that this revolution is a lot quieter than the ones before, taking place as it does silently from the screens of our phones and laptops. The silence is an illusion. The volume of noise is now measured in packets of data rather than decibels, and it’s loader than ever. If companies don’t engage with different generations of customers on their own ground then they will not be heard at all.

In my next blog I will look at how Millennials and other demographic groups can be better served by adopting a customer-centric approach to marketing.